The first time when we came to Vila Real de Santo António we fell in love in this charming little city. We have been all around the coastline in Algarve but never felt so at home until we came here. This place has movement all year around. Since it is a small town it doesn’t take long time to became friends with the local Portuguese people. The surroundings here are also very attractive since we love to move and be active. Here is a fantastic beach, indoor swimming pool, and natural reserves with pine trees. It is easy to quickly access nature.

We went around with a local agency to look at different houses and found that ERA the local agency was very helpful. We quickly agreed that we wanted to live very centric in this little town. It is so nice to be able to walk or take the bicycle around. We choose to look in the old part of town and found almost immediately a house that has for us the charm and location giving a great potential. We did not choose it for the color though :):) 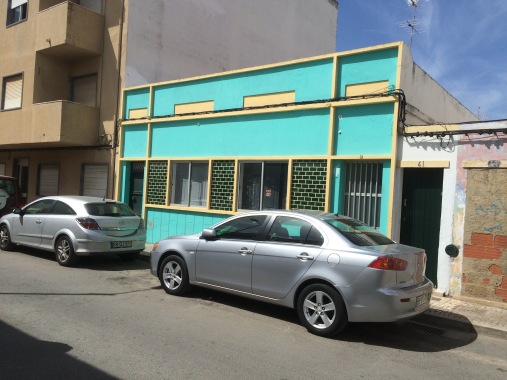 We did not buy it at once, we travelled back in March again to look closer to the Tavira and Cabanas area, since we know that there are many foreigners that settled down there. We spent 3 weeks there but we really felt that we liked Vila Real de Santo António so much more.

We came back into this area again in the beginning off August, looked again with the agency ERA, but came back to the house that we saw already in January and we decided to buy it.

The final payment was made in January 2016, then we started to talk to different architects to see what they thought could be done as we also wanted to add another floor to the house. The charming thing with this house is that it has a little backyard, something that is important for us, to be able to sit outside and do the barbecue.

We decided on one of the architects with local knowledge, that is well known here in Vila Real, his name is Laurentino Cordeiro. Laurentino advised us to build a new house on the plot instead of doing anything to the old one. Considering that we had plans to extend the house with a second floor and also for the insolation of the house. When we did the layout he contributed with very good ideas and we feel that we are very much aligned and then he is doing all the work for the building permission to the Camera Municipal. That process has taken 2 months.

We have also interview 3 different constructors and decided on one that we now have signed a contract with. Bureaucracy is slow even here but hopefully we can start the demolition of the old house this week. We will keep an update here to inform you on how things are progressing with our new home. It is an exciting time ahead of us. Stene and I have never had the opportunity to actually build something from the beginning but during all this year when we have been moving around the world we have got many ideas that we now can realize.